Hi! It’s a busy, exciting day for Girl Noticed! Tonight at the brand new Pembroke Pines City Center is the Grand opening of THE FRANK Art Gallery and Exhibit Hall. Girl Noticed was asked over two years ago to be a part of this exhibit and opening, and is thrilled to have been given the opportunity to paint a mural as well as exhibit work in this great space. Thank you Jill Slaughter for all your hard work and the opportunity. 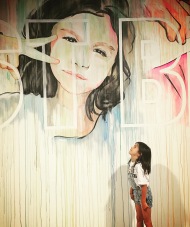 The mural at the Frank is part of the Nationwide Girl Noticed project and carries the message “Just Being Me”. The two subjects painted on the wall are Myra Wexler and 6 year old Valerie. They are an example of how at any age a girl/woman should feel free and proud to be herself. The photos I referenced for the mural were chosen at random after I had chosen the two of them as my subjects. How amazing when I found photos of them both making the same hand gesture. I thought, wow what a great example of how at any age a female must embrace who she is.
There are also two paintings on canvas that accompany the mural and are now a part of the new traveling exhibit titled “Girl Noticed, “Just Being Me”. Lily and Kiana’s parents were asked to take photos of them being themselves, and they also submitted videos of them talking about why it’s important to be noticed and be yourself.  Those videos will also be part of a future show that is in the works.
A third portrait is being worked on, although I wasn’t able to finish in time for tonights show, is of Valerie’s awesome sister Karina. There’s only so much time in the day to paint! If you would like to be included in this ongoing series, take a photo of yourself “just being you”, and email it to girlnoticed@gmail.com to be considered. Videos are also being accepted. Check out our Facebook page Girl Noticed to view the videos Karina, Valerie, Lily and Kiana made and submit your own by email. You could be part of a future exhibition.
All of the subjects in the Frank Exhibit tonight are from Florida except for Valerie, who I met in Colorado while doing a Girl Noticed mural there. I chose her because I wanted to work with her mom, Misty Elizabeth, a photographer who is raising two young children on her own, working and going to school. She values her time with her kids and sets an example for them to follow that I admire.  Myra is know in the art scene as The “Queen or Miami” her eccentric sense of style and flair for creative uniqueness made her perfect to show your valuable at any age.
The dripping paint in the mural signifies that life is unpredictable, and our fluidity as women is not only necessary but essential.
Meanwhile, In Cincinatti …

I am in Cincinnati working on my 10th state Girl Noticed Mural.
I will not be able to attend tonight’s opening, so please take lots of photos and tag #girlnoticed when you post! My daughter Grace will be there taking photos as well, so make sure to say hello!

Come see me step out of my comfort zone and perform in Love Loss and What I Wore next Thursday or Saturday! Ticket link in my bio! #play #benefit #stage #fundraiser
Have you applied to the national exhibition Persistence II in Norfolk, VA @d’art center? I am honored to be the juror again this year. Deadline Sunday, Feb 9th apply at https://artist.callforentry.org/festivals_unique_info.php?ID=7464 or visit d-artcenter.org