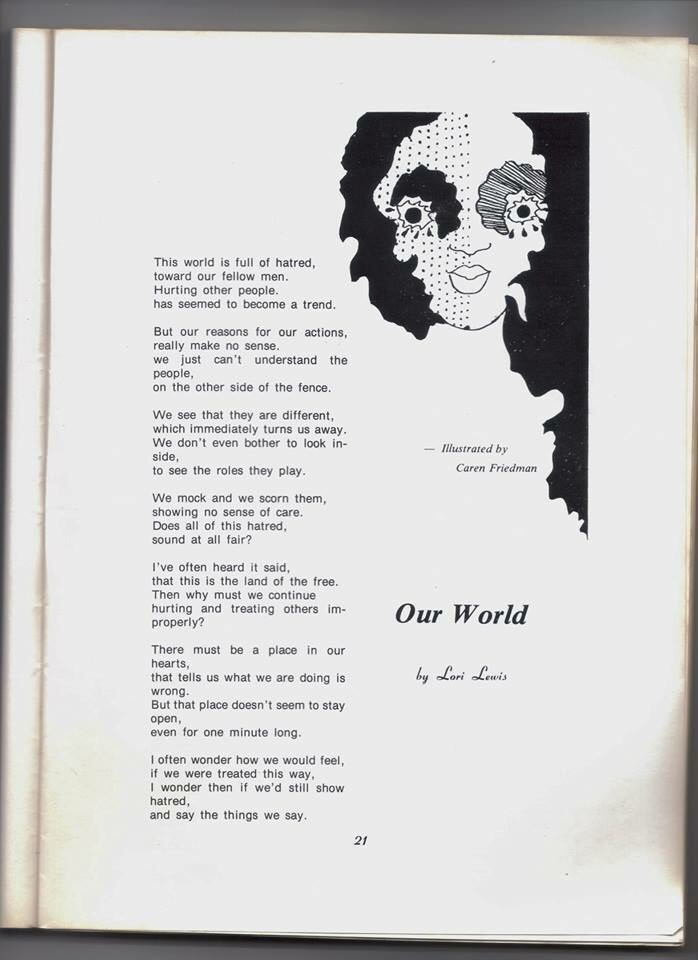 These words reflect a young girl who saw the world as a place filled with hatred and injustice. I was 15. I wrote this for my school magazine.

At 15 I had been a witness to racial prejudice. My school frequently had race riots, and I saw people who just wanted the same rights as everyone else be put down, beat up, ridiculed and even killed for fighting for those rights. Before I even knew what the word gay meant I saw people I cared about be judged and discriminated against based on who they loved. I saw people loose their jobs and be completely shunned from society because they had a disease called AIDS no one had even begun to understand. My body, not yet fully developed had already been touched, been hurt, and been used, leaving how I saw my own self as damaged and broken. I was part of a system that failed me. My thoughts were not important and my words were silenced.

At 15 I somehow believed the world could be different. I believed if people looked at their own behaviors, stopped worrying about what they didn’t understand, stopped being selfish, we could live in a world that held compassion. I believed people could change. I believed there were enough good people to make a real difference.

34 year’s later, I sometimes feel naive thinking it could all change. Could there be acceptance and could we all embrace each other? Might we lift each other up, instead of celebrating the knocking down and participating in the hate? I think, how is a 15 year old, living in this world that we have created, supposed to have hope? There’s a new headline everyday to bang another nail in the coffin, tainting a young persons dreams and visions of a bright future.

I look at the young girl sitting across from me at a cafe staring at her phone. Snapchat, a picture, a moment that lasts for seconds. That’s how we view life today, in short glimpses, snapshots. Always what’s new, what’s next? There’s another girl brooding in a corner. She’s already feeling the effects of her environment, feeling alone, unacceptable. I look at my daughter at age 25 with her whole life in front of her, but who I know questions if she can have the things she hopes for. She too has already witnessed enough… correction, too much, in her world. Am I naive, maybe?

I promised my 15 year old self many years ago I wouldn’t give up. I made that promise again when I had my daughter. It’s my mission with Girl Noticed to be able to use my art and the message attached to it as a vehicle to provoke change. Noticing girls for the right reasons and lifting them up, we show them they have value. I hope we make the world they live in a world that isn’t hopeless. When they embrace and love who they are, they will see that they are the ones who can make the difference. I notice because someone noticed me. Small moments where someone said I was good enough made me who I am today. A mother, a daughter, an artist, a friend, a proud member of the LGBT community, a survivor, a fighter, a recovering alcoholic, and so much more. I am a whole and beautiful woman who still believes in a better world and the people in it.

Please support our girls by donating to Girl Noticed, helping us find walls, participating in our events and doing your part every day to lift up and value our young people. They need us and we most certainly need them.